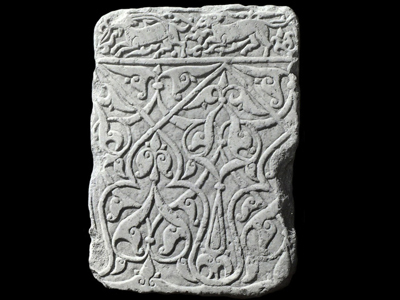 Dado carved in bas-relief (type 21). The decoration is composed of two horizontal sections: the upper section consists of a band with leftbound running animals on a background of vegetal elements, the lower section of a sequence of interlaced trilobated arches. The band of trilobated arches meets at an angle of ab. 90°. They are set against a vegetal pattern of interlaced half-palmettes and fleur-de-lis.

The height of the larger panel with known dimensions (fragmentary) is 44 cm, its width 26.5 cm; its thickness 6 cm.