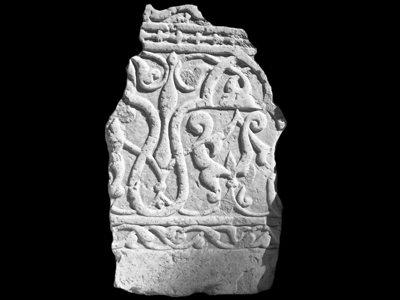 Dado carved in bas-relief (type 20). This type is represented by one specimen. The existing decoration is composed of four horizontal sections: the upper section is not visible in the existing photo; the second section consists of a narrow band with a sequence of small geometrical motifs, the third section of a sequence of interlaced trilobated arches, and the lower section of a sequence of two interlaced and rolled up half-palmettes. The trilobated arches are set against a vegetal pattern of interlaced half-palmettes and fleur-de-lis.

The dimensions are unknown.

The artifact was found re-employed in the Ghazni area in 1957.

Type 20 might have been used as an architectural dado or as a tomb paneling.