Dado with benedictory inscription (type 17b) 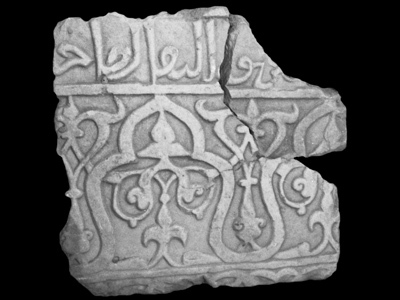 Dado carved in bas-relief (type 17b). This type is represented by one specimen. The decoration is composed of three horizontal sections: the upper section consists of an epigraphic band in cursive script, the middle section of a sequence of interlaced trilobated arches, and the lower section of two interlaced and rolled up half-palmettes. The trilobated arches are set against a vegetal pattern of interlaced half-palmettes and fleur-de-lis.

The artifact was found re-employed in the Ghazni area in 1958.

Type 17b differs from dadoes type 17a mainly for the style of the script, the vegetal motifs and the two interlaced and rolled up half-palmettes.