Workshop The Ghaznavids and Their Neighbours 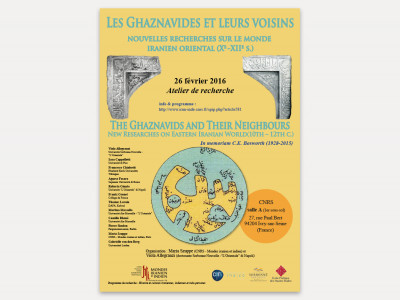 Maria Szuppe (CNRS) and Viola Allegranzi (PhD student, Sorbonne Nouvelle ‐ Paris 3 ; "L'Orientale" di Napoli) convened this meeting in the framework of the
research program «Histoire et cultures iraniennes, indiennes et indo­‐persanes : Élites et réseaux» of the Research Unit Mondes iranien et indien (UMR 7528) and thanks to the financial support of this institution. The event was dedicated to the memory of Clifford Edmund Bosworth (29 December 1928 -­28 February 2015), the great historian and orientalist who promoted a new approach and consideration for the study of the eastern Islamic lands, thus paving the way for several generations of scholars. The objective of the workshop was to gather experienced scholars as well as young researchers working in different fields (History, Literature, Art and Archaeology, etc.) and to discuss the outcomes of recent studies on textual and material sources casting new light on the political and cultural history of Medieval Iran.

The eight papers and three posters presented pointed to a positive willingness to renew exchanges on issues related to the Ghaznavid period. The speakers addressed topics pertaining to political and religious history through the analysis of texts (F. Chiabotti, C. Rhoné) and materials (S. Cappelletti, P. Siméon). They also shared the results of the ongoing research on some Islamic sites in Afghanistan: in particular, a new DAFA archaeological project in the Bamiyan area (T. Lorain) and new data on the materials from the well-­known site of Ghazni (R. Giunta, A. Fusaro) were presented. Some attempts were made at using poetic texts as sources for a reconstruction of the setting and customs at the Ghaznavid court (V. Allegranzi, G. van den Berg). Finally, two contributors concentrated on the Ghaznavid memory over the centuries, particularly on the topography of holy burial places in Ghazni (M. Massullo) and on the transmission of epic cycles
attributed to the Ghaznavid poets in later manuscripts (M. Szuppe).

The diversity of topics presented and the workshop’s inclusive ambiance facilitated exchanges and several points of common interest emerged from the discussions. Participants agreed on the fact that a plural view may contribute to a better understanding of the political, scholarly and artistic tradition of eastern medieval Iran, this being an issue that is undoubtedly in need of a reappraisal. For all these reasons, we hope that the questions raised during this first meeting will be further investigated in a second edition, which would also give the opportunity for widening the scope of the workshop and the network of the researchers involved.

Further details on the this event at: Mondes iranien et indien: Les Ghaznavides