The Buddhist site of Tapa Sardar 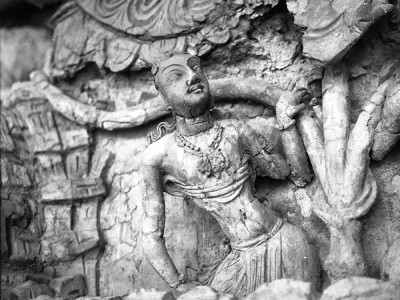 A window into the cultural history of Pre-Islamic Afghanistan

This imposing Buddhist sanctuary rises on a hill which dominates a vast portion of the Dasht-i Manara plain. The excavation of the site, carried out by the Italian Archaeological Mission between the late 1960s and the late 1970s, was resumed in 2003 under the direction of Giovanni Verardi and again stopped because of the unsafe security condition in the area.

As attested by an inscribed votive pot found in the site, the sanctuary was known in the past as the Kanika mahārāja vihāra (“the temple of the Great King Kanishka”). This evidence confirms that the sacred area of Tapa Sardar was founded during the Kushan period (either by Kanishka I or Kanishka II, in the 2nd or 3rd century CE) and also reinforces the hypothesis that it may well correspond to the Šāh Bahār (“The temple of the King”) that, according to the Kitāb al-buldān, was destroyed in 795 CE by the Muslim army.

After being destroyed by a fire (possibly to be related to the first Muslim incursion in 671/672), Tapa Sardar underwent an extensive reconstruction in the late 7th/ early 8th century CE. The date of the final abandonment, though uncertain, does not precede in any case the late 8th/9th century CE.  As clearly highlighted by the archaeological investigation of the site, Tapa Sardar was a prestigious religious centre where not only new artistic forms were experienced and established but also periodical ceremonies of great political relevance might have taken place. This is suggested by iconographies depicting members of the ruling élites and, especially in the last phases of the site, cultic images symbolically connected to the theme of the protection of the “Buddhist kingdom”.

The general features of the site

In the Upper Terrace, the Great Stupa was surrounded by richly decorated chapels and by small star-shaped stūpas and statues representing enthroned figures of Buddhas and/or Bodhisattvas. Minor sacred areas (and most likely the monastery) were located on lower terraces.

The fire of the 7th century CE destroyed the most part of the architectural setting and decoration of the earliest phases of the site. However, the hundreds of sculptural fragments which were found in a filling layer (this in turn composed of layers (5) and (6), “different aspects of the same filling”), as well as the remains of the early architectures, help us to reconstruct the main features of the old sanctuary.

The stylistic and iconographic patterns of the Antique Period 1 (2nd/3rd century - 4th/5th century CE?) are modelled after the “Gandharan” traditions, with a marked Hellenistic flavour. Of the rich original polychromy only traces can now be detected in the fragments of clay sculptures and the scant extant evidence of mural paintings.

Antique Period 2 (5th/6th - 7th century CE?) is characterized by colossal images and the extensive use of gilding, which was also used in “renovating” the sculptures from the earlier period.

The Recent Period marks an extraordinary revival after the devastation caused by the fire. It is during this period that the chapels were built (or better, re-built) and decorated. The main iconographic subjects, against the wall opposite the entrance, were gigantic Buddha images, accompanied by ancillary deities, and immersed in a rocky landscape which was populated by a variety of human, animal and monstrous figures, as attested by the numerous sculptural fragments found in Layer (4).

The artists took advantage of the physical characteristics of clay to their limits. Clay was used both to convey the colossal solidity of the main images (the Buddha in parinirvāṇa in Chapel 63 measured 15 meters in length), and the lively scenes that surrounded them. The versatile nature of the material was reinforced by the painting and gilding of the surface.

Gilding could either be applied to parts of a sculpture – that was the case of the larger ones – preferring the face and the hands, or to the entire figure, as especially in the case of small figures.

As customary in Afghanistan and Central Asia, also at Tapa Sardar architectures and sculptures were realised   primarily with clay. The plasticity and malleability of this extraordinary material allowed for the production of masterpieces of grace and refinement, whether on a grand or a minute scale. However, clay is also very fragile and loses cohesion and consistency over time. In excavations, it is usually found in shapeless masses or in an extremely precarious state.

For this reason, the Italian Archaeological Mission has always taken the greatest care when digging, restoring and documenting every single discovery: this is the only way to preserve the objects and understand the ideas which gave them life.

First rescue on the site and restoration in the laboratory

At Tapa Sardar, of particular importance in the fieldwork were the techniques of removal of the artefacts: pre-strengthening and provisional cleanings were completed in the laboratories, where obvious and disturbing fractures were closed and all the pieces were individually consolidated in depth. The interventions followed the criteria of neutrality and reversibility. These operations, carried out systematically in all the excavation campaigns of the Italian Archaeological Mission, allowed a considerable corpus of individual painted or sculpted images to be preserved.

If restoration saves the physical objects, documentation secures the possibility of reconstructing things no longer extant and transmitting their memory across time. Thanks to the careful archaeological documentation of the 1960s and 1970s is still possible, after decades, to work out reconstructive hypotheses about the original contexts. The description, measurements and finding spot of the fragments are precious hints to their original position and clustering.

A new impulse to the development of reconstructive hypotheses has been given by this project. Graphic reconstructions are now being studied.

The rows of stūpas and enthroned figures in the Upper Terrace

Among the ongoing studies, there is the hypothetical reconstruction of a series of relatively small monuments. These deserve special attention, as they are the prototypes of architectures and iconographies which developed in Himalayan and Far-Eastern countries. Thus by reconstructing these monuments, we can bridge the gap between apparently distant places and times. At the same time, we can better understand the central role of Afghanistan in the cultural history of Late Antique Asia.