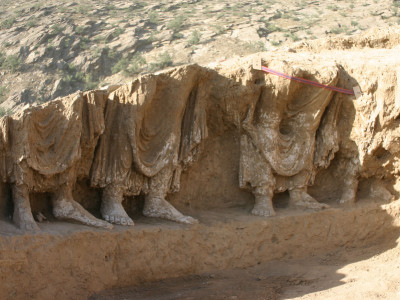 University of Naples "L’Orientale", Department of Asia, Africa and Mediterranean

The main topic of the dissertation is the clay-based sculptural production from the Buddhist archaeological site of Tepe Narenj, located in Kabul area, in Afghanistan. From 2004 to 2014, the site has been excavated by the archaeologist Zafar Paiman under the authority of the Archaeology Institute of Afghanistan (AIA) and, since 2014, with the assistance of the Italian Archaeological Mission in Afghanistan (IAMA) for field activity, documentation and analytical study, within the framework of specific agreements between the IAMA and the AIA.

The careful archaeological and photographic documentation, the large amount of sculptures and other archaeological finds yielded by the excavation, and the relatively well-preserved condition of the site make of Tepe Narenj an important reference point for the cultural history of pre-Islamic Afghanistan. The site bears clear witness to the flourishing and vitality of the period comprised between the 3rd/4th century CE and the 10th/11th century CE, which fully corresponds to the rule of the Hunas and of the Shahi. In addition, it constitutes an important term of comparison for numerous analogous or coeval sites, most of them more scarcely documented.

The results of this research work can be summarised as follows: 1) a comprehensive catalogue of the relevant sculptural material; 2)  the study of the material, technical, stylistic and iconographic aspects of the clay sculptures, aimed to shed light on the aesthetical canons which underlie this production; 3) a better understanding of the physical, historical and cultural contexts of  this production, which was achieved through cross-comparison of archaeological, historical, artistic and numismatic data and comparison with analogous sites. For the latter purpose, the Buddhist site of Tapa Sardar, excavated in the Ghazni area by the IAMA during the 1960s and 1970s and then, for a brief period, in the 2000s, was of great relevance. With its detailed archaeological documentation and high stratigraphic reliability, the site provides a safe path for comparative study based on the solid ground of scientific, stratigraphic and chronological evidence and not only on stylistic considerations or debatable historical sources.

Besides analysing very interesting case studies from the artistic point of view, the research also highlighted historical aspects, such as how in Afghanistan Buddhism was supported by a strong layman’s demand up to the eve of the definitive Islamic conquest, contrary to what has often been claimed on the basis of partial literary sources or even misinterpretation of archaeological data.